There are plenty of things out there that are beautifully and intelligently designed – NBA tickets aren’t one of them.

Inspired by the Boarding Pass FAIL project by Tyler Thompson, this is an exercise that I came up with  to allow participants to think critically on the importance of info and the visually friendliness of the layouts. Hopefully by partaking in this project, one can extend their perspectives and rethink the way how anything’s designed.

In this case, the mind behind this redesign exercise is Taylor Fulwiler, our latest design intern. 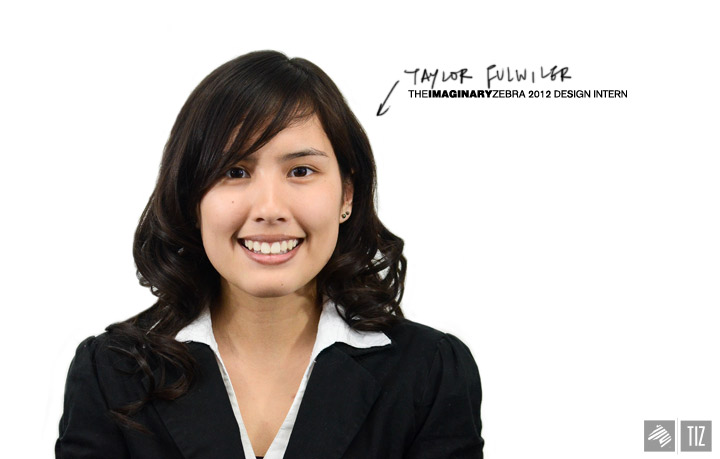 ↑She’s a second-year student at UC Davis working towards her BA in design (with an emphasis on visual communications). You guys will see plenty more of her work in the near future.

I briefed her quickly:

-Dimension: 72dpi, same WxH proportion to the original ticket.
-Think about the info on the ticket: what info’s priority? What is the purpose of the ticket? Should anything be enlarged? What’s the most appropriate typeface?
-Feel free to omit what you think may be unnecessary
-Feel free to use colors.
She evaluated the ticket we have now in our box office:

It’s confusing and, frankly, quite hideous, relatively when compare to the NBA enterprise. NBA’s got great commercials and terrific branding (teams, web platform, related accessories). It’s where amazing happens, how could they allow such ticket design?!

This is what she came up with:

“I kept it pretty simple due to the fact that it’s main purpose is to provide information. For text, I made sure the teams playing were the most dominant, followed by the date/time and the seating. I used a simple typeface that’s easy to read, made the layout pretty straightforward and omitted information that tended to be repeated too much. I also used the Sacramento Kings’ team colors, but made sure to use them in a way that allowed the information to be read easily without being an eyesore. I also chose to omit the background pattern, as I felt it was unnecessary and only made the ticket seem more cluttered.” – Taylor

1. It seems like they didn’t stress too much on the destinations. Perhaps it seems obvious to the ticket holder, so they weigh more on the seating and other info.
2. The design doesn’t shout the brand of the airline, neither. I think having the color accent and small logo’s enough to spread brand-awareness.
3. The types are dramatically varied in sizing. Yay or nay?
4. Contrast is a good tool to attract attention to important information. (but does it always work? would it make the layout too cluttered?)
5. Some of the boarding pass designers really thought outside the box – using diagrams as instruction manual; making things more personal with  sentences…etc “

After reevaluating the info on the ticket, she designed this:

“So after looking at my first redesign, I admit that I was more focused on the function of the ticket (being able to provide information in a clean and simple way) rather than its aesthetics.

After checking out the link you sent me, I decided to:
1.) Place more emphasis on the seating. After all, it’s what people look at the most when they actually enter the basketball stadium.
2.) I kept the color scheme and logo the same to promote the Sacramento Kings without being too over the top.
3.) I personally like the variations in type sizing. I feel like the eye naturally adjusts to big text faster, so I took advantage of this to promote the seating numbers (as well as the time).
4.) Sometimes using contrast can be a hit or miss. I tried it out with this redesign and I felt like it worked well, brought more attention to the seating number (something I keep stressing, I know haha).

5.) I wasn’t really a fan of the personal sentences, due to the unnecessary words getting in the way of processing the important information. I feel that short, sweet and to-the-point is more effective in this situation, as basketball goers are more concerned with getting to their seat, getting their food, souvenirs, etc. They don’t have time to kill (unlike passengers, who may be waiting for hours), so I feel like they would not want to waste time “reading” their ticket for crucial information. As for the diagrams, I tried them out but I didn’t think they worked well, so I ultimately decided to omit any diagrams.” – Taylor

I went “A few more things to consider:

1.) People typically read from left to right. Would that affect the way you design the ticket?
2.) They usually use “thermal printing” for tickets. Meaning the only color would show up is black.
The ticket itself can be pre-printed with graphics, but any info that may be vary between tickets would have to be black.
3.) Check out the ticket below:
(http://www.kjcardinal.com/bloggraphics/Game6_ticket.jpg
They eliminated a lot of info, how do you feel about that? Are all the info on the current ticket necessary?
4.) If you could change the layout ( though, remaining the same dimension) how would you change? Vertical vs horizontal? “

Finally, she ended up with this: 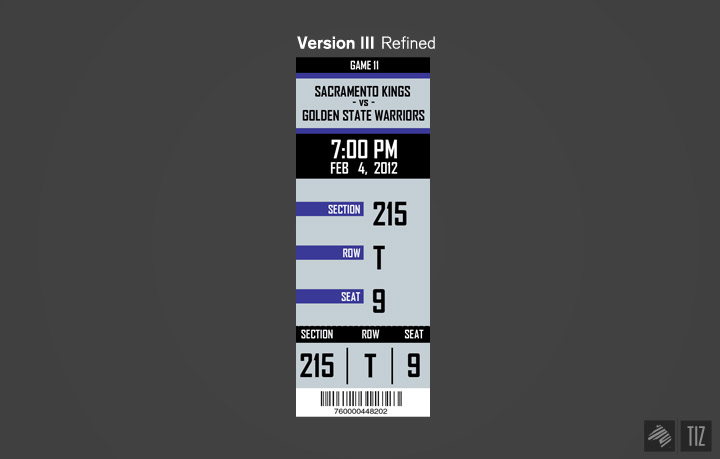 “For this rendition I chose to have more fun and change it to a vertical layout. As a result, I did not have to worry about the whole people reading left to right aspect as most things were centered. After looking at the example you showed me, I really liked the idea of keeping the info on the ticket as minimal as possible, so I ultimately decided to eliminate the location (pavilion) and the day of the game (Saturday). Finally, I took out the logo. I figured in reality the logo can simply be placed on the back of the ticket (on what I hope would be a full-colored background to compliment the colors on the front of the ticket).

I admit, the thermal printing thing really got me. As a result, this redesign isn’t as flashy in aesthetics as the last, but rather more practical. It’s very simple, but I wanted the main focus to be on the seating and the time of the game, as I saw those two tidbits to be the most crucial to the ticket-holder.” – Taylor

What do you guys think?