My wife was out of town, so I had to make the best of it.

After considering many options, I ended up booking the tickets to Arizona. It was the closest/least expensive option out of Cali.

Just a few days before the trip, Lu, my brother-in-law, decided to join me to embark on this adventure.

One of the best people to travel with. Down for anything and always a team player.

We were ambitious. After trimming out the first and last day for flight/Airbnb commute, we have really just 2 days to take in as much Arizona as we could. I first plotted out all the landmarks, then carefully streamline a route that can include the most of those spots.

Flight’s at 9AM, woke up early to beat rush hour traffic to OAK airport.

A quick facetime with my wife, who was on the other side of the globe.

I wouldn’t want to pull an 127 hours. Lesson from Aron Ralston, always tell someone where you’re going before venture into the wilderness. Our trip wouldn’t be as remote as what Mr. Ralston did, but better safe than sorry.

Awed by the majestic landscape of Arizona. Couldn’t be more excited.

Direct flight’s usually faster, but I had a layover in Albuquerque, New Mexico, so it took a close to 4 hours. I didn’t mind, though, I slept the entire way. It’s one of my gifts, I can almost sleep anywhere anytime.

Living in the future, man. #workfromhome

I don’t usually name cars, but this fella’s Ethan, as in Ethan Hawke from Gattaca. Small car but lots of heart.

I made it in before my brother-in-law. With a few hours to spare, I swung by downtown phoenix and a close by park.

Blogging about this is making me hungry.

Yeah, I’m definitely getting Chipotle in a bit.

University of Arizona offered one epic building. I loved the copper reflective accent that highlighted the essence of Arizona.

Hole in the Rock

Just 20 minutes east of downtown Phoenix was this:

It was an easy 3 minute hike to the top.

but that’s none of my business.

Part of the reasons that I decided to venture into Arizona was also to scout places to bring my future kid(s).

One of the most beautiful things that doesn’t cost you a penny.

Lu made it. Dinner time. Then it was heading up to Airbnb and getting ready for the journey of day 2.

Woke up at the crack of dawn.

Just 20 minutes from where we stayed (Cornville, AZ), the Sedona city is located at the heart of many major parks of Arizona.

To catch the sunrise, we swung by the Sedona Airport, the tallest point of Sedona.

From Sedona to our next destination was a good 2.5 hours drive.

This is a free site, which means you get a ton of tourists (like us) at peak times. Besides water, the most scarce resource here was parking space.

From parking lot to the bend requires a good 10 minutes hike.

…was actually not too far from the ground.

The horseshoe bend in all its glory:

Just 15 minutes away from the bend was..

There are upper and lower Antelope Canyons. Upper seemed to be the more popular.
Having a guide is a requirement for visiting the canyon, ever since the tragedy in ’97—a flash flood took away the lives of 11 hikers.

It’s wise to reserve your spots a few weeks in advance, especially during the peak season.
There are several companies available, I chose this (because the rest were all sold out by the time I tried booking)

Tickets range between $40-$60, depending on the time of the visit. Slots between 10:30am-1pm are best for photos, if you’re into the ray that penetrates the canyon, but it’s consequently more expensive. Each tour lasts about 90 minutes.

Our vehicle of choice:

From the tour gathering point to the actual canyon took about 15 minutes drive time. Only guided tours allowed.

The vehicle looked tough, but not as tough as we hoped:

Stranded in the middle of the dried riverbed under high 90s heat.

Rescued moments later and finally made it:

One of the hardest things to photograph from the canyon wasn’t the ray, but an empty canyon. Throughout the tour, we felt like, as Lu put it, “cattle ushered through the canyon”. And that was an understatement. To avoid congestion, we had to speed pass the narrow walkways that were continually filled by new tourists.

The “eye of the canyon.” 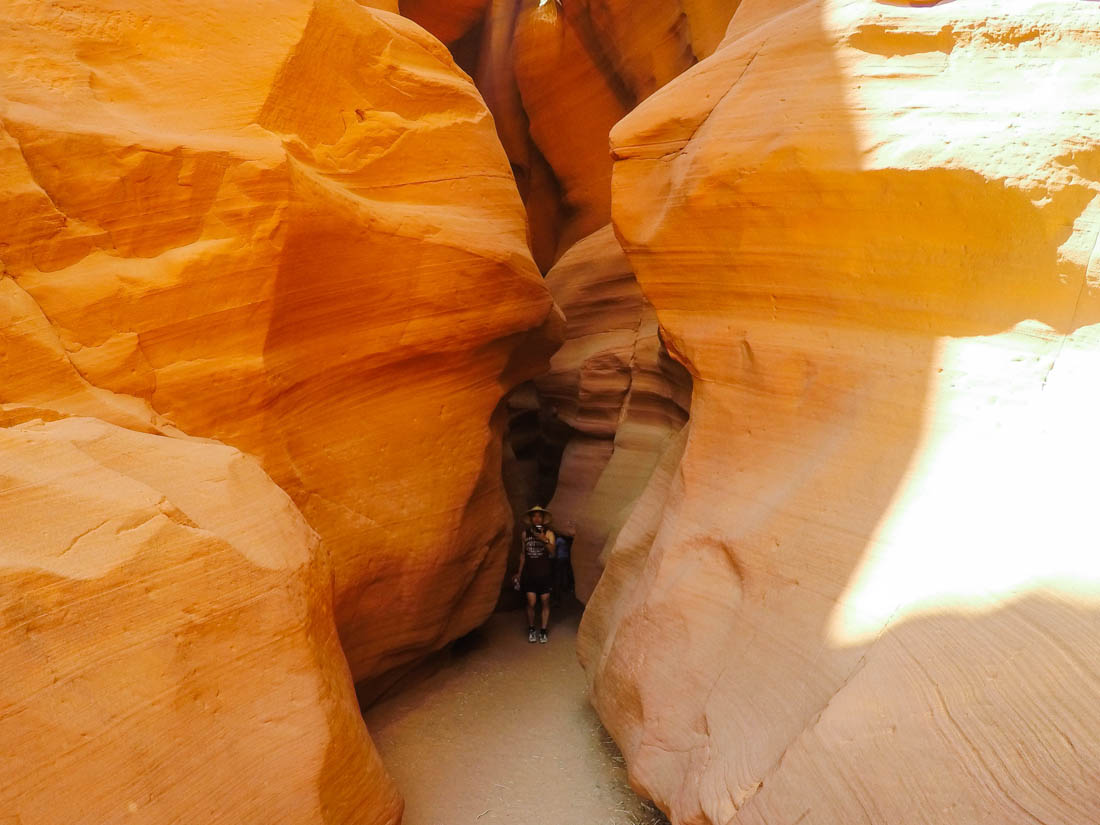 You can tell how badass this was just by the sound of its name.

This is a mile-long underground lava cave that was formed roughly 700,000 years ago by molten rock that erupted from a volcanic vent in nearby Hart Prairie. It’s about 40 degrees (F) in the cave year round, so bring a long sleeve or jacket. Also, it’s pitch back, so a flashlight can come in handy.

A bull can do whatever he wants. We can wait.

This is where horror stories happens.

Complete darkness inside the cave.

The little crystals were water droplets.

Here’s an example of how dark the cave was. The below photo was shot in 20 seconds exposure.

Another reason to bring a flashlight: